I hope you have enjoyed my little countdown. Today's quote, the final one, comes from Kalpana Chawla, a shuttle astronaut that we tragically lost on Colombia's final flight (STS-107). 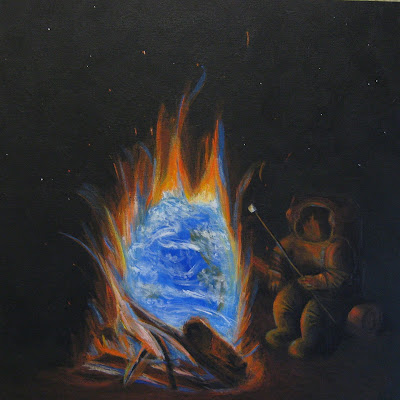 "This planet below you is our campsite, and you know of no other campground."

As a geologist, a former Girl Scout, and a member of an "outdoorsy" family, I have spent my fair share of time around a campfire, and maybe that's why this particular quote resonates so strongly for me. Even the smell of a campfire makes me feel warm and safe and loved. You know how you go into the woods to get more wood or find sticks for marshmallows and it's cold and dark and you don't know what's out there and there's bugs, and then you find that perfect stick and you head back, you break into the clearing and just ahead you can see the campfire and it's warm and inviting and surrounded by the people you love, a little oasis in the dark. That's the Earth, our little oasis in the vast darkness of space.

Wanna celebrate Earth Day? Here are some local activities for DC, or find something happening near you. 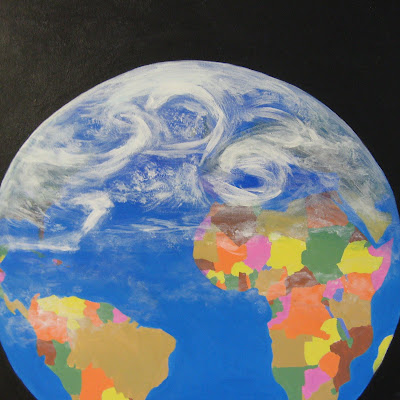 I really believe that if the political leaders of the world could see their planet from a distance of 100,000 miles their outlook could be fundamentally changed. That all-important border would be invisible, that noisy argument silenced. The tiny globe would continue to turn, serenely ignoring its subdivisions, presenting a unified façade that would cry out for unified understanding, for homogeneous treatment. The earth must become as it appears: blue and white, not capitalist or Communist; blue and white, not rich or poor; blue and white, not envious or envied.

Today we come back to Michael Collins, Apollo 11, with a quote from his book Carrying the Fire: An Astronauts Journeys. This one is a bit more profound than his quote about seeing the world in his window from part 4. I had a hard time deciding on today's' quote, Mike was certainly not the only one to note how from space, "borders" and "nations" don't exist, along with the sense of Earth's fragility, it is the most common sentiment expressed by those lucky few that have had the opportunity to take in this view.

Here are a few other quotes that inspired this image...

The first day or so we all pointed to our countries. The third or fourth day we were pointing to our continents. By the fifth day, we were aware of only one Earth.
— Sultan bin Salman Al-Saud, STS-51G

You develop an instant global consciousness, a people orientation, an intense dissatisfaction with the state of the world, and a compulsion to do something about it. From out there on the Moon, international politics look so petty. You want to grab a politician by the scruff of the neck and drag him a quarter of a million miles out and say, "Look at that, you son of a bitch.
— Edgar Mitchell, Apollo 14, People magazine, 8 April 1974

When you're finally up at the Moon looking back on earth, all those differences and nationalistic traits are pretty well going to blend, and you're going to get a concept that maybe this really is one world and why the hell can't we learn to live together like decent people.
— Frank Borman, Apollo 8, Newsweek, 23 December 1968.

As I looked down, I saw a large river meandering slowly along for miles, passing from one country to another without stopping. I also saw huge forests, extending along several borders. And I watched the extent of one ocean touch the shores of separate continents. Two words leaped to mind as I looked down on all this: commonality and interdependence. We are one world.
— John-David Bartoe, STS-51F

Countdown to Earth Day part 6 of 8 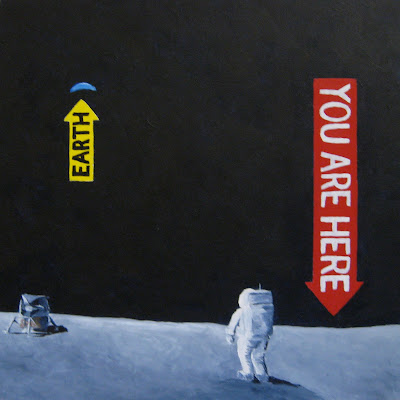 This quote from Alan Bean, Apollo 12, is from an interview he did soon after he returned from the Moon. I really love this one because I have the feeling that this would be my reaction - like, "I so want to be here in this moment, but I can't quite wrap my brain around what is going on. Is this really happening?"

I have many times walked out of the lab and seen the Moon hanging in the sky and thought about how the bits of rock and dust that I was just looking at come from up there, and even that thought sometimes seems inconceivable, but to be up there looking at the Earth in the distance must be mindboggling, utterly and completely mindboggling.

Alan Bean, by the way became an amazing artist after his astronaut career ended. Here is a lovely painting he did of the view looking back at "Mother Earth" and another he calls "A jewel in the heavens". You can find more of his work at www.alanbean.com.

Countdown to Earth Day part 5 of 8 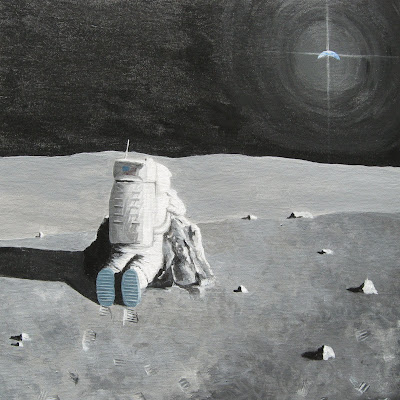 "My view of our planet was a glimpse of divinity."

Today's quote comes from Edgar Mitchell, Apollo 14. For several of the Apollo astronauts, seeing the Earth from the Moon was a profoundly spiritual moment.

As far as I know, Edgar did not kneel and pray on the surface as I depict here (in fact, I'm not totally sure that would have been physically possible in one of those suits, they didn't bend well), but the rock-altar is based on a real rock at the Ap 14 site.

It is true that a passage from Genesis was read aloud by the Apollo 8 crew, the first crew to set eyes on the Earth from a distance. We do also know that Buzz Aldrin stopped to pray on the Moon and was, in fact, the first to celebrate holy communion on the Moon. Apollo 15 astronaut James Irwin was so deeply moved by his experience that he left the astronaut corp to became the founding president of the High Flight Foundation, an inter-denominational evangelical organization, and devoted the rest of his life to "spreading the good news of Jesus Christ." 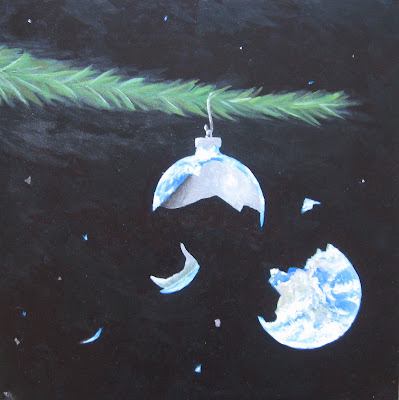 "The Earth reminded us of a Christmas tree ornament hanging in the blackness of space. As we got farther and farther away it diminished in size. Finally it shrank to the size of a marble, the most beautiful marble you can imagine. That beautiful, warm, living object looked so fragile, so delicate, that if you touched it with a finger it would crumble and fall apart."

This quote comes from James Irwin, Apollo 15. Many of the astronauts have commented on how fragile the Earth appears, but I really liked the analogy to the Christmas tree ornament, maybe because I have broken enough of them in my day to understand just how fragile they are.


Countdown to Earth Day part 1
Posted by IntrplnetSarah at 9:48 AM No comments: 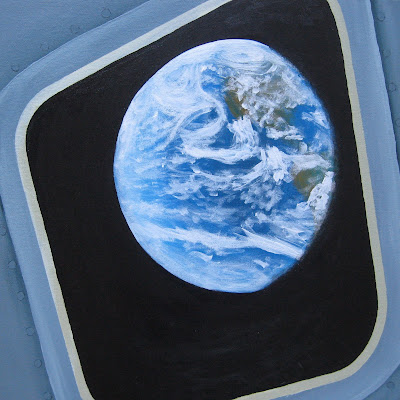 "I've got the world in my window."

This quote comes from the other Apollo 11 astronaut, Michael Collins. Mike is the one that stayed in orbit while Neil and Buzz went down to the surface. This quote is not terribly profound, he was just talking to mission control about what he could see out the window. The full quote is "I've got the world in my window for a change and looking at it through the monocular, it's really something. I wish I could describe it properly, but the weather is very good. South America is coming around into view. I can see on the - what appears to me to be upper horizon, a point that must be just about Seattle, Washington, and then from there I can see all the way down to the southern tip - Tierra del Fuego and the southern tip of the continent." (Mission control responds - Roger. Sounds like you've got a beautiful view up there.) "Absolutely fantastic. I hope the pictures come out; we're rotating around where it's going out of view again."

I guess I just really liked the idea that the whole world could fit into that tiny little window.

Today's quote comes from Apollo 17 astronaut and the one and only geologist to walk on the Moon, Jack Schmitt. 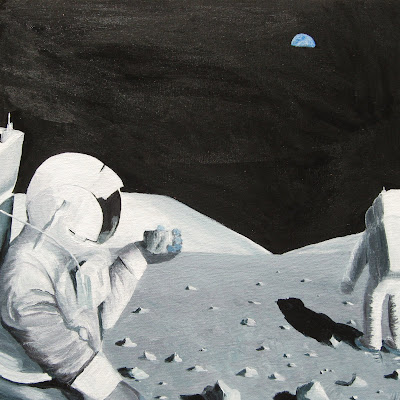 "Eh! You seen one Earth, you've seen them all."

A little context for this one...
The Apollo 17 crew had arrived at the Moon and had just finished their first major task, getting the rover assembled, when Gene Cernan was distracted by the view of the Earth in the distance. He called to his partner, "Hey Jack, just stop. You owe yourself thirty seconds to look up over the South Massif at the Earth." "What? The Earth?" Jack replied. "Just look up there," Gene insisted, and this quote was Jack's reply as he went about his business doing some soil observations (I took a little artistic license by putting a rock in his hands, which made a better visual counterpoint to the Moon then him staring at the ground).

Gene notes in his book Last Man on the Moon that in that moment he was "almost disgusted with the blasé reaction" but I totally get it. They were already seven precious minutes behind schedule and with such limited time and an entire planet to explore, even 30 seconds wasted would mean one less sample collected or one less observation made. Besides that, Jack had spent most of the 3-day trip to the Moon looking back at the Earth working on a meteorology study, he had seen plenty of the Earth, this was his moment to see the Moon.

Upon his return to Earth Jack was quite amused to find that this quote had actually been picked up and co-opted by the environmental movement and could be found on a wide array of t-shirts and bumper stickers.

Countdown to Earth Day part 1 part 2
Posted by IntrplnetSarah at 3:53 PM No comments: 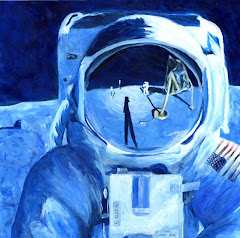 New Painting - an extreme close up of Buzz Aldrin
I'm going to try to rotate the image above every couple of weeks with either cool pictures from work or some of my recent artwork. If you like my paintings, you can find more here

Buy My Stuff from CafePress

Check out the selection of T-shirts, magnets, mugs and assorted other things you can buy emblazoned with my space art or fun geology and television inspired logos.

Other cool blogs you should check out